A June 2013 UNESCO report on the first “lidar” aerial laser survey of Angkor Wat in Cambodia, which exposes topography under tree canopy, has revealed a mysterious geoglyph attached to this great temple dedicated to the Hindu god Vishnu.

The immense geoglyphic relief area is exactly as wide from east to west as that defined by the outer moat walls of Angkor Wat itself, and its length south to north matches that between the temple’s walls.  This terraformed landscape has confounded the international archaeological team involved. 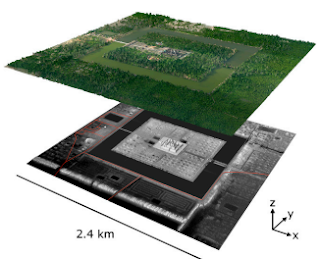 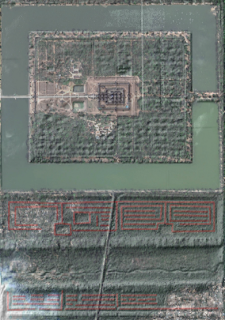 An enhanced lidar image clearly shows a very complex network of 6 rectilinear grids in a vast walled enclosure adjacent to the south moat of Angkor Wat, later transected by a road and creek floodway.  The cryptic grid patterns are formed by linear embankments over 10 metres wide with narrow shallow continuous channels linking to holding reservoirs.

This discovery is bound to attract great speculation from the metaphysical New Age set, those who study the Peruvian Nazca Lines, because one coiled grid features an opposed pair of labyrinthal spirals designed to be seen only from on high.

This geoglyph is like nothing known on earth and looks like Vishnu himself stamped a printed integrated circuit chipset onto this sacred ground.  Given the scale, orientation and pattern there can be little doubt about its spiritual link to the world’s largest and most sacred Hindu temple.  However, Roman and Cretan
coins and pottery have been uncovered near SE Asian archaeological sites, and some of these ancient trade items featured labyrinths. 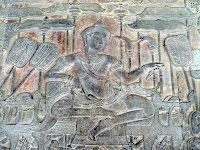 The discovery effectively enlarges the overall temple complex designed for Khmer King Suryavarman II in the 12th century.   Furthermore, the geometric garden's attachment to Angkor Wat certainly suggests that he had royal engineers involved in the construction.

Labyrinths were used by monks as pathways, one way in one out, for meditative garden journeys leading to centredness.  But we associate squared cursive coils almost solely with Cretan or Roman labyrinths, which appeared on their ceramics and coins.

Any practical speculation about function leads directly to Chinese Gei Wei polyculture which often employed linear embankment mounds and parallel channel ponds.  Sustainable fish and plant system culture, linked to raised beds of bamboo or mulberry, was perfected by the 12th century and is still in evidence in SE Asia today. 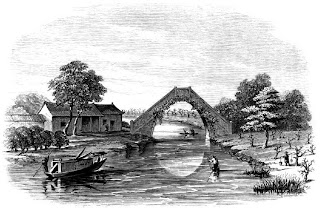 In wetland areas mud scraped from channel bottoms in the dry season would be applied as seasonal fertilizer to the embankments.  The banks would get higher over decades, explaining how they reached 22 metres at Angkor, with the troughs perhaps a metre or two lower rising all the same.  The dry raised banks enabled the use of ladders, required for picking mulberry leaves to feed to silkworms.

The grid channels and ponds would fill naturally with the monsoon water but the Khmers seem to have created an incredibly complex hydraulic management system, including pressure reservoirs, to sustain a cross-seasonal garden.  The silk production cycle not coincidentally requires 56,700 kilos of mulberry to produce its same weight in silkworm waste and waste water, which yields 2,700 kilos of cocoons, 206 of raw silk and 2,300 kilos of fresh fish. 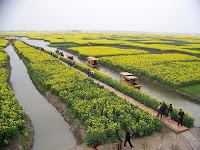 Shallow water channels were stocked with freshwater fish species, molluscs and crustaceans that survived in low oxygen levels, and these fed off silkworm waste and pupae provided by the mulberry silk processing cycle.  Alternatively, some channels may have been drained to cultivate rice and vegetables, as was the case with embankment mulberry culture in China on flat plains.

This royal polyculture garden at Angkor Wat would have ensured silk production and a ready supply of fresh food for the court rulers, military generals and high priests.  There is little refrigeration even today in tropical SE Asia, and one can readily imagine the Angkor system holding live carp and giant prawns offered as tribute by fishermen from the nearby great lake of Tonle Sap.

Another possibility is that the entire squared garden area was an artificial wetland or lake created to sustain a floating or raised field garden.  Long straight bamboo rafts were initially placed in rows in lieu of embankments, projecting into lakes, and these rafts topped with soil made ideal vegetable growing platforms.  Others may have been established on pole and reed mats, or on raised rubble foundations, similar to those in Mesoamerica at the time.

Archaeologists on the ground will bear in mind other theories, salt production for example, given the evaporation effect of the tropical dry season.  Wet salt from the coastal pans near Kampot could have been barged to the site for secondary drying.  There was no salt available in the Angkor region and this extremely valuable commodity is often listed in scripture as being donated to the temple.

Perhaps there was a military aspect to the confusing labyrinths, given that any army approaching from the south would have a hopeless task breaching the outer embankment, marching around in circles, before being greeted by a moat. 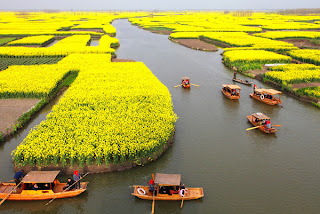 Today millions of tourists are driven on tuk tuks and buses blithely through the middle of this geoglyphic garden, along grand Vithei Charles De Gaulle, unaware that they are passing through one the world’s newest great archaeological mysteries.

The garden remains a mystery to the guiding site archaeologist, Dr. Damian Evans, who noted in the Phnom Penh Post recently that the terraform is self-contained and not linked to outer landscape systems of water management or habitation.  Covering several square kilometers the site is bound to yield "an explanation for these things that does not involve aliens".  Don't hold your breath.  Here comes Erich Von Daniken now with his high-flying bird men.

Posted by Touchstone at 4:19 PM